Fern Blodgett was raised in Cobourg and always dreamt of going to sea.  Early in World War 2, she decided to train to be a Radio Operator but the Canadian Navy and merchant navy would not hire a woman.  Not to be dissuaded, Fern found a Norwegian ship who would and did.  In July 23, 2018, Leona Woods presented to Council her idea of remembering Fern’s heroism and pioneering of women’s roles, by commissioning a statue to be put in Victoria Park.  Today that statue was unveiled before a large crowd of “dignitaries”.  Represented were the Canadian Navy, the Norwegian Ambassador to Canada, donors. and the committee who helped Leona reach her goal.  The day was chosen because 2020 is the 75th anniversary of the end of the Battle of the Atlantic and October is Women’s History Month in Canada.  And the weather was kind – a perfect autumn day – warm but windy.

There was a limit to the crowd size with a fence to control that although there were people on the beach outside the fence who were also watching.  People inside the fence were generally masked and kept their social distance. The Coast Guard showed their interest; their vessel was stationed just offshore for most of the ceremony.

The story of Fern has been told in previous Posts – see the links below – but Graham Beer has made a professional Video which does  a great job of explaining Fern’s story (see below).

Graham has his own news media site here.  Graham was also able to solve a problem: Fern’s children and others in Norway wanted to come to the unveiling but Covid-19 travel restrictions made that impossible. However, Graham has the equipment and expertise so was able to stream the event for the world to see.  A video of the full event is now available on You-Tube – see below.

The statue is in Victoria Park at the East end near the beach – it’s worth a look.

The event had a large number of speakers but if you don’t have time for the full 100 minutes, I made a 7:30 minute summary video with only some speakers and only excerpts of their speeches.  There are also some photos below the videos.

Photos of the event. 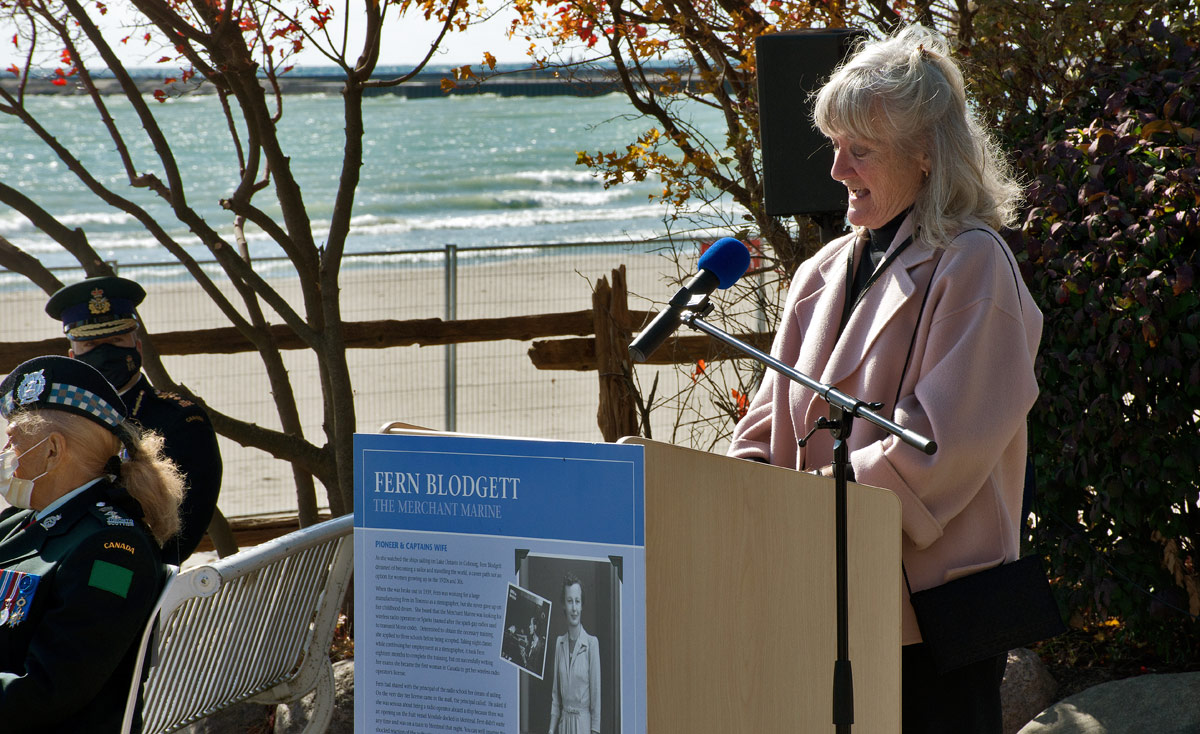 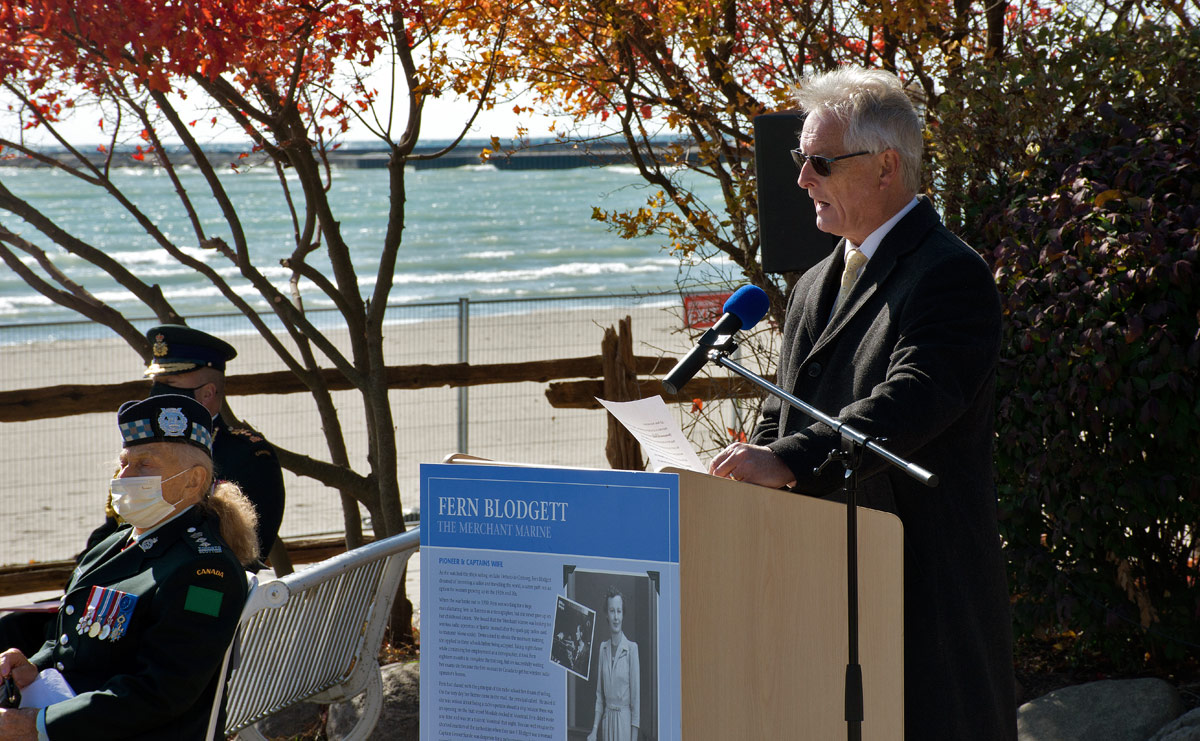 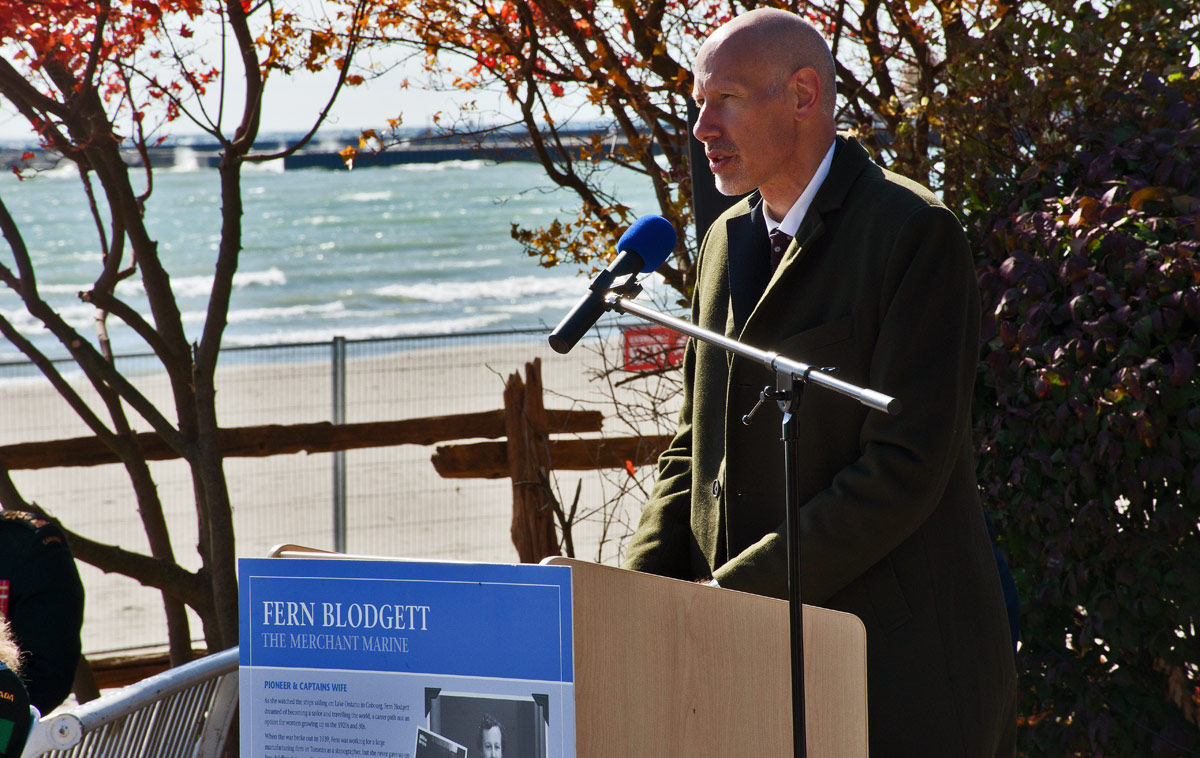 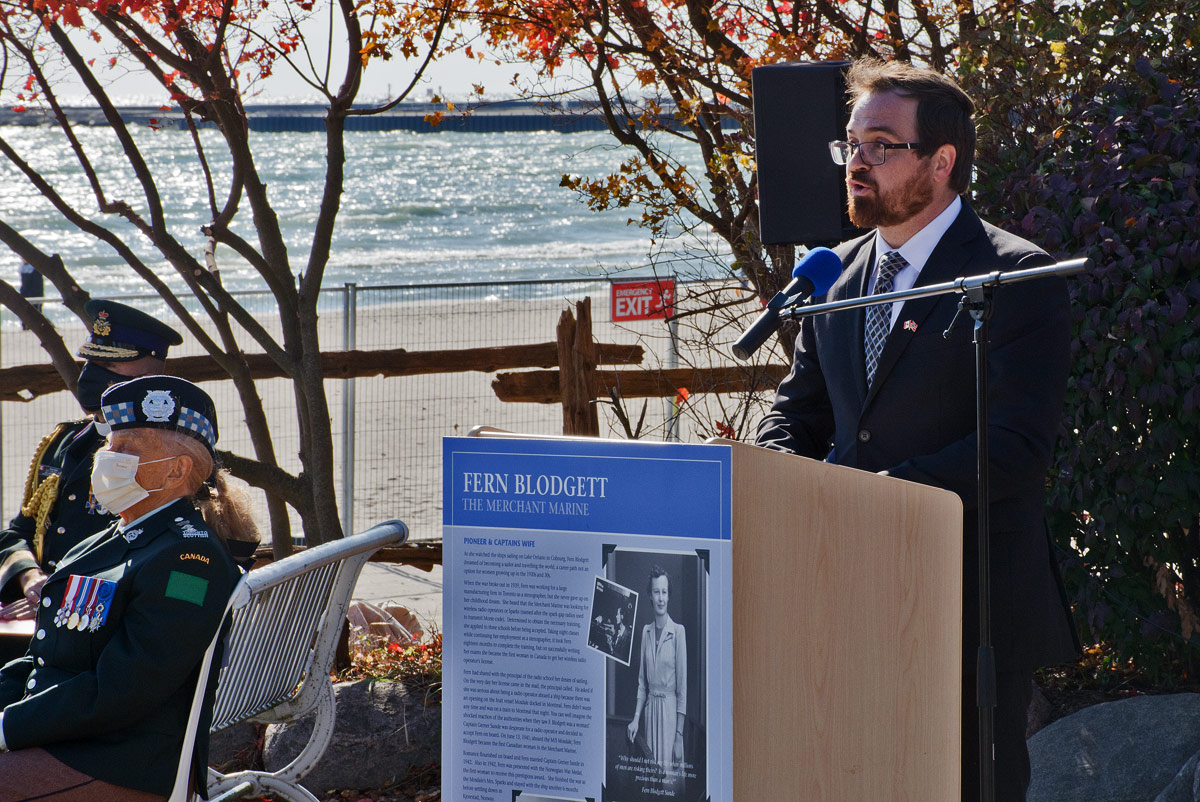 I would like to think that this happy event would inspire our local poet laureate (and/or other local creative types) to memorialize the life and accomplishments of Fern Blodgett Sunde in suitable verse or prose.

3
0
Supporter of this Wonderful Project

Leona especially deserves great credit for initiating this project, and seeing it through to this wonderful result. Her Committee also have earned kudos. The unveiling was superbly organized under challenging COVID constraints. The site is perfect. Anyone looking at the sculpture should take careful note of the detail etchings on the inside of the wave… since they cld be easily missed.

Well done, Graham Beer, for all the work you have done to make this presentation available to Fern Blodgett Sunde’s family. You’ve come a long way since winning a Marie Dressler Foundation Bursary in 2018.

Also, many thanks to the committee for bringing us Fern’s story, and to sculptor Tyler Fauvelle for his lovely depiction of Fern.

What a beautiful work of art. We had a chance to go and see the statue this morning (Sunday) and what a perfect place for it to be situated, with the ‘white caps’ rolling in from behind.

Well done! Congratulations to all involved.

Yes congrats to those that did all the digging around piecing this wonderful, happy story together. Gotta love historians. The statue itself is wonderful, bright, adventurous, youthful young woman heading out to sea to do her duty. We certainly need more of that character in our current and future times.

Thank you to all June, Leona, la très chère madame Vari for your dedication. I should share with you the latest news of another great woman, a Cobourg heroe : Sally McCaig, my friend and neighbor of 33 years, we lost on mother’s day. She was the first commercial pilot and veteran to take her licence in Miami as Canadian would not certify women.
https://www.legacy.com/obituaries/northumberlandnews/obituary.aspx?n=sarah-pringle-mccaig-sally&pid=196221723&fhid=41334

Thank you Wally. Sally was much more senior and was hired from the Red Cross flying a four motor aircraft. She transported blood to be delivered to soldiers urgently between Toronto, Savannah and Miami. She adored it and had to stop when she got married. Near the end of her life she was telling such interesting part of her trips, the cockpit instruments and the weather forecasts. A serious equestrian she became a horse rider teacher she was born in the house she passed away… We developped a mutual passion for gardens and had tea over each other’s piazza. We enjoyed cocktail sandwiches and coffee while watching movies by a summer rainfall.. she invited me often to swim at her cousin’s pool and I was driving Jamie’s convertible Chrysler through town to get there. She was waving like a Queen in the back seat. Such fun. We drove through the country roads and told me all about the mansions Cobourg used to have. We shared many great memories. She was a mentor and a great supporter when Jamie became seriously ill. She spoke German and a beautiful French.

GREAT listeng to you Wally, Esppecilly working with the late FOSSIL Russel
now @ 74, thought he was a tad accentric in my youth? NOW I SEE HE WAS ON THE MONEY (also i did not think back then restoring the town hall was a good idea! (WAS I WRONG)

Likewise George, although I thought the restoration of Vic Hall was good, a couple years before that project began, Lenah Fisher proposed that it be cleaned. Over the century it accumulated grime. I opposed it in a letter to the editor, claiming it was like putting a miniskirt on an elderly woman. (WAS I WRONG) After the cleaning was done, it was resplendent. Fossil Russell was the only Canadian to win the Elijah Parrish Lovejoy Award for Courage in Journalism. It was a privilege to have worked for him — he a was wonderful mentor and an out of towner to boot..

Johanne – thank you for the information about Sally, another trailblazer from our town. I think it would be possible to put together a coffee table book, one page per woman of 50 notable Northumberland Women, and include Sally, and Fern, and Marie Dressler,Francis Gage, Mina Benson Hubbard, Lenah Field Fisher, Helen Vari …….. and others. It would be an inspiring collection and great gift for young high school graduates.

Leona — Thank you for your reply. It is an excellent idea. I will be giving a lecture about Sally to a business group soon. Sally learned to fly near here. She was hired in their office and proposed working for free in exchange for flying lessons ! When she was told women couldn’t apply to be licensed, “sky is the limit” she said and acquired her certification two weeks later in Miami. She was so determined and fascinating. Thank you again madam.

Great tribute to Fern Blodgett Sunde an obscure past Cobourg resident, (not like Marie Dressler)lets just hope the statue is not vandalized!

“The Von Koerber family was renting the house from John Field for $8.00 a month in 1868 when their daughter Leila was born on Nov. 9 in the northeast room, a child who would go on to fame as Marie Dressler.“

Like many other creative and imaginative individuals since then until today, they leave Cobourg to enhance their talents elsewhere and for the most part, they do not return, until after they are dead.

Btw, hope does not ensure that the statue will not be vandalized. Lighting and video surveillance can mitigate vandalism against such a beautifully executed sculpture.