The private school now occupying what used to be CDCI West wants to build accommodation for its students.  They have bought adjacent properties – 125-129 King St. W. and 209 Hibernia St – and want to demolish them and build new buildings in their place.  The King Street property was previously “Sleep Made Simple” and the Hibernia property had a succession of businesses on the ground floor and a rental unit upstairs (see photos below).   The application for demolition was presented to Town staff and staff recommendations were presented to the Heritage Advisory Committee who endorsed them and will ask Council to endorse them at the next Committee of the Whole Council meeting. Basically, they agreed to the demolition but not the proposed replacement building which “is not sensitive to the existing cultural heritage resource to the east and thus much more work is required.”  That is, the proposed accommodation building does not meet Heritage requirements.

When the School had an open house in April 2019 (see photo and links below), there were 46 students and 75 expected in September.  The 46 were housed in dormitories at the school and it was planned that the additional students would be boarded in nearby homes.  There are no updates available on these numbers.

As part of the application, a Heritage Assessment was required (see link below).  This includes background information including extensive details of previous owners.  William Academy bought the properties for $559K in May and June of 2017.  That was a few months after CDCI West was reported to have been sold (Feb 2017).  Sleep Made Simple at the King Street location has now moved to new premises at 1 King Street East.  The report describes the properties and concludes that, for the King Street location:  “The building has no heritage architectural features worth saving” and “Similarly, the two-storey dwelling located directly behind the mattress store has no architecturally significant heritage features”. And for the Hibernia location:  “Overall, the building does not have any special architectural characteristics or heritage value.”  It appears that staff and the Heritage Advisory Committee agreed with this assessment.

The application describes the proposed buildings:

The proposed development is composed of two buildings. Building A along King Street is three storeys which includes a commercial ground floor and two upper floors for residential dorm rooms for the William Academy.  Building B, closer to Hibernia Street, is four floors with a commercial ground floor and residence dorms on the three upper floors. This building would be linked on the second and third floors to the respective floors of the existing William Academy building.

Note that on both King Street and Hibernia, the ground floors would be commercial (stores).

Below are some images from the school’s application.  The current building on the corner of King and Hibernia is not part of the development but any proposed building must not clash with it.  As noted above, the proposed building has not been approved; all that has been approved (subject to Council endorsement) is demolition in principle.  (I think that means “OK but don’t do anything until the new building designs are approved.) 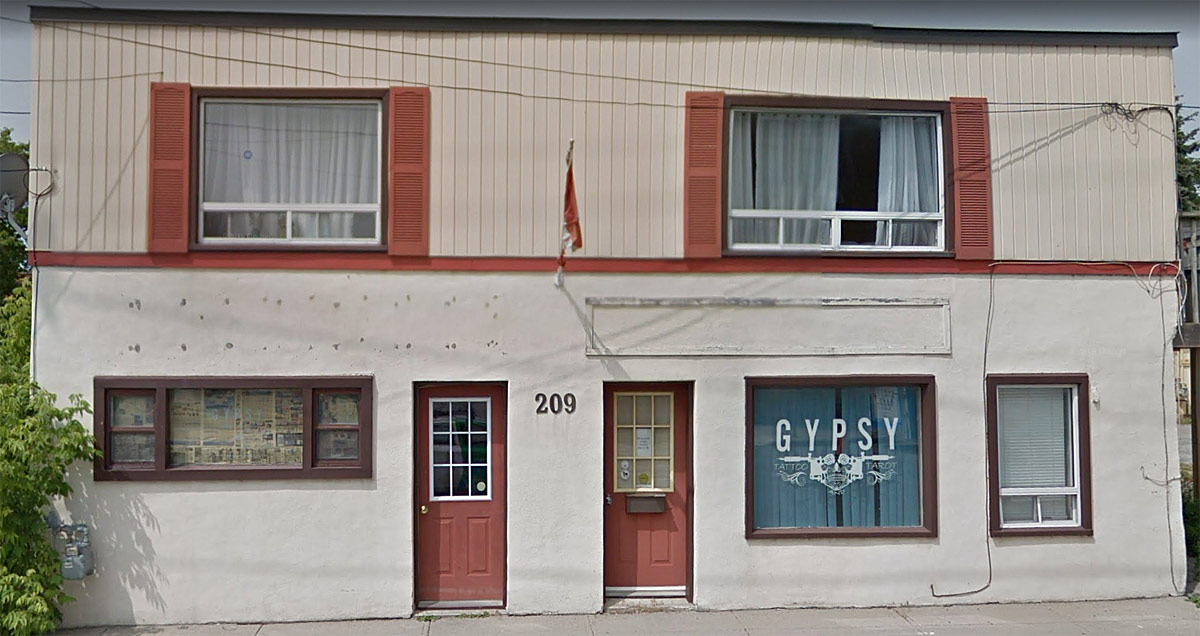 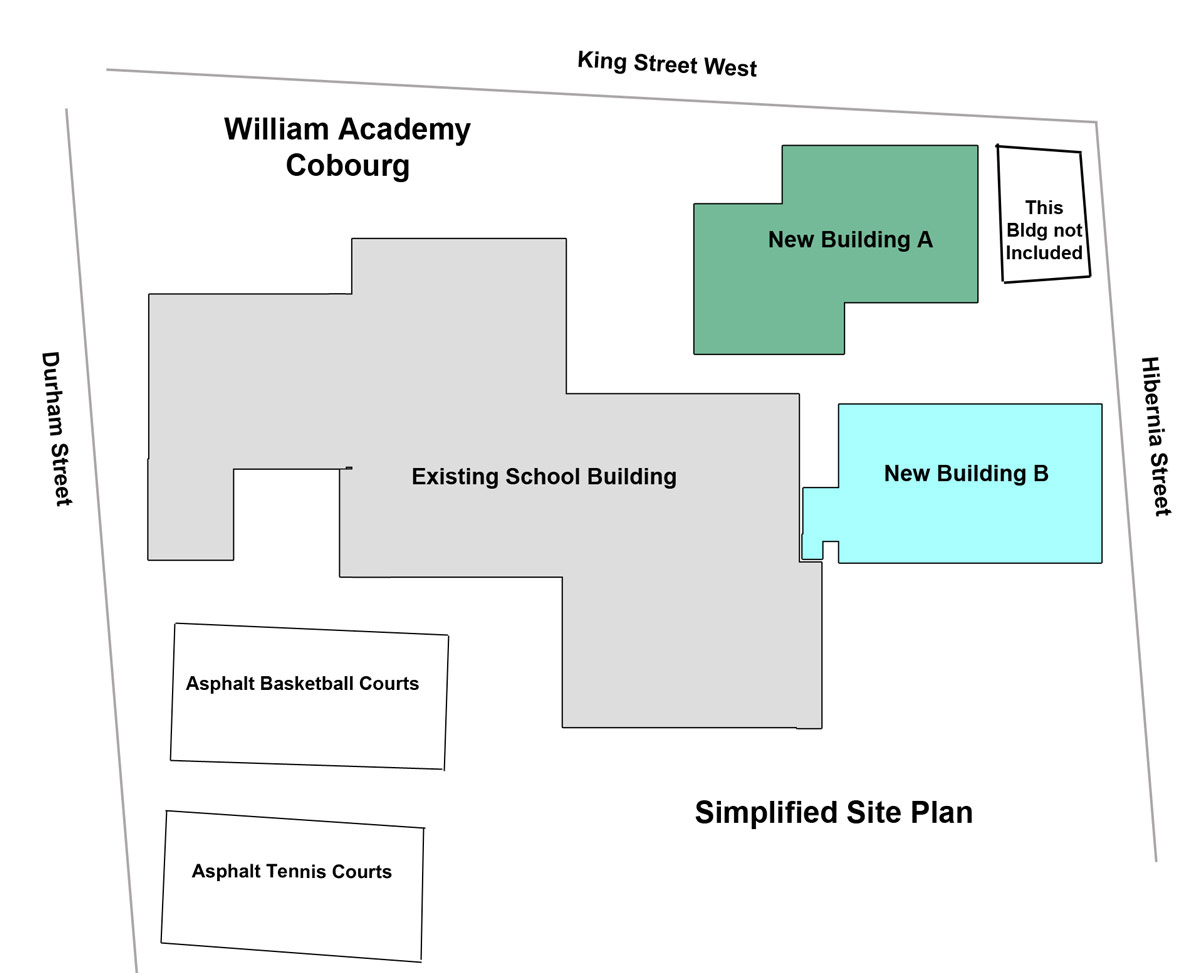 Given the purchase dates of these properties, it appears that building additional accommodation was planned from the start.  Proceeding now implies that the School is doing well although there are few signs of the students around Town.

This type of facility would be a positive addition to town. These young people are educated, respectful and polite. Unlike many of the druggie types lounging around our community these days. It would create a business opportunity for restaurants and shops nearby. However the plans need to be modified in keeping with the original school structure and heritage detail. Anything will be an improvement over the current buildings on that corner.

Anytime I hear that a business,industry etc is expanding,its great news. Alot better than ones that close. Those two buildings are an eyesore and anything will be an improvement. Hope to see more students come to our Town.

I’m surprised a building of that design would be allowed to be used as a dormitory. None of the windows appears useable as an escape route in an emergency.

All issues would be addressed under a building permit. Part 11,I believe.

So this proposal is just a opening stance to start the negotiating process then?

I am sure our Canadians being held captive by the Chinese Government and their families will appreciate the hospitality being shown to the Chinese “students”. I guess a free trip given to local politicians will have secured anything they want.

Further to your point Kyle, it would be interesting to get a full report from John Henderson and Gil Brocanier on the results of that trip in addition to all of Jeff Weng’s business interests,

For an idea of contemporary building design that may be a closer fit into our heritage downtown core, a fairly recent new build for student residences at Trent University. See Gzowski College Annex and related buildings near Water Street and Nassau Mills Road, at one of the main gateway entrances to the main campus. Note the roof line and detailing at soffit and fascia.

Do you mean this building?

Something like that would look terrific in the proposed location and fit right in.
﻿

This is Gzowski College Annex

I think hope Mirriam means the one you’ve linked to, Champlain College.
I always found Gzowski College an eyesore whenever traveling through Peterborough by boat or car. Certainly wouldn’t fit in, in Cobourg.

Well if you look here, JimT’s pic could also be the Champlain College Annex, the Lady Eaton College Annex, or the Otonabe College Annex
https://www.trentu.ca/housing/peterborough-on-campus/undergraduate
I believe the top three floors of the Peter Gzowski College (the Big Cheese) are designated as the student residences that you refer to. But, I think Champlain College is the building you are referring to. And, I concur, it would be a nice fit in Cobourg.
Keep digging Miriam… LOL.

hey Frenchy,
In my original post I wrote ‘Gzwoski College Annex and related buildings’ True, I could have picked Lady Eaton Annex or another in the group of similarly fashioned buildings.
To your challenge I will add this. Another idea for building design would be akin to a sculptural piece of building that could be a focal point. It would also have to respect the proportions and massing set out by the Victorian streetscape downtown while at the same time be state of the art in sustainability design and operations. I think this would be more challenging to achieve and likely more expensive. Statement buildings, like public art, do tend to stir up conversation. Interesting also about the Trent example is that the original campus buildings, by R.H, Thom and now recognized with heritage status, do not have the exteriors of the ‘traditional college’ look of these newer residences.

Yes, JimT. That is the one.

Not so fast JimT.

Right, JimT, that choice would look good in our downtown!

That choice would look great in our downtown. Unfortunately that one is not the Peter Gzowski College, rather the Champlain College.

Last I heard the brand new building being constructed on the corner of William and University is rental. Why not turn the “training school” into low rental housing or the Woodlawn Inn instead of a rehabilitation place for people who have been caught up in the current trend of drugs versus common sense. Get rid of the temptation, close the Cannabis stores, open a candy store!!!

How many rentals units are we even talking about here? The sleep store is only one storey, no units above. The other building is quite small.

Overall the added student population would be a benefit to the downtown as younger demographic is missing in the area.

Totally agree with J.D.blog comment below
” Proceeding now implies that the School is doing well although there are few signs of the students around Town.“

Personally I’ve seen very few of the students or involved in town nor even around the school exterior.

It also stated that there were only 46 students housed there currently. Quite a small number that would presumably increase dramatically. Also, I did not know that people were tracking these students so intently as to know if they’ve “seen one around town”. How would you know? Are they wearing signs on their heads?

You’re assuming that people are “tracking” students intently.?
Their visual appearance in small groups would be a good indicator of who they are, and as I mentioned I have seen very few.

There are two houses in my neighbourhood that house some of these students. They are very quiet, polite, responsible young people who are very serious about succeeding with their studies AND during this pandemic, respectfully wear masks outdoors and obviously support local restaurants frequently, by the number of deliveries to those houses.
Personally, I’d welcome more of them to our town than the late-night noisy party-goers that also currently live nearby.

I don’t believe I mentioned anything about their behaviour etc but simply was agreeing with John Draper’s comment re “few signs of the students around town”.

There is a well known saying re having an opinion .They’re like ……….everybody has one ” 🤔

A big brick box is uninspired, in my opinion, and right at gateway into downtown.

I like this. Those existing buildings have been eyesores for a long time, and this would not only be a visual refresh, but it would also provide potential for more people living downtown. And that in turn should hopefully be a good thing from a downtown revitalization perspective. More money spent in downtown stores, more people moving about, etc. Thumbs up from me.

I agree completely. Let’s have something fresh and new, to heck with this heritage stuff. Are you trying to relive the past? Get on with the future.

Perhaps research other places where students residences are in place to find out how the area is effected by this. Oshawa and those who live close to this type of building have serious issues. Just saying.

It’s not the building’s fault…

Just goes to show how the modernists have ruined an original building. Further research would show that this building was probably one of, if not the earliest Automobile dealerships in Town.

Good thing we have the Cobourg Dragon Boat and Canoe Club to keep the students out of trouble during the summer months.
Bill